Comments Off on Grey Elm Tree

The Grey Elm tree, also known as the American Elm, has enjoyed a popular but tortured existence in the 20th century. Grey Elm trees are commonly planted along residential roads due to their graceful style. As well as their long-life, fast-growth and tolerance of compact soils and air pollution. Above all its strength and workability make it a popular choice for furniture. Along with flooring, internal joinery, and paneling.

But the 20th century brought a dire threat to the Grey Elm. In 1930, European logs infected with Dutch elm disease (DED) were imported to the United States. Therefore beginning a period of devastation for the beloved elm tree. Spread primarily by the Elm Bark Beetle, DED slowly moved from elm to elm. As a result, afflicting the vascular system (the water-moving mechanism) of innumerable Grey Elms and leading to decay and death.

Thankfully, preventive measures have saved the Grey Elm from extinction. Its limited availability, while frustrating, has led to a greater appreciation of this beautiful wood in the world of wood furniture. To see a collection of Grey Elm furniture, visit our Shipshewana Amish Furniture Store and view first-hand what makes Grey Elm such a unique wood. 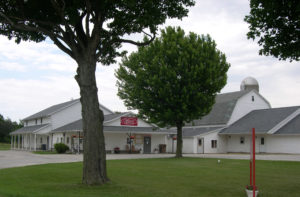