Amish Furniture, Handcrafted for Your Home

What do Spanish Missionaries, Frank Lloyd Wright and a 20th century Wisconsin furniture craftsman have in common? Each of them popularized the “mission style” for which wood furniture has become renowned.

The story begins with Spanish Missionaries who build simple adobe missions in the Southwestern United States. As a result, the elegance and practicality of these missions influenced architects. Most notably Frank Lloyd Wright.  He incorporated the mission style in his building design. As well as his furniture-craftsmanship. The “prairie mission style” (featuring thin, closely-spaced wood slats) was due in part to his creative influence.

Enter Gustav Stickley, a German immigrant living in Wisconsin.  He popularized mission style home furnishings by mass producing them in his furniture factories. As a result, the simple design, sturdy construction, and classic wood slats captured the imagination of the American public.  Soon mission style furniture became a household name.

Today, mission style furniture boasts a wide range of derivative styles. A few examples are the Royal Mission, Classic Mission, and the Brooklyn Mission. As well as the Arts and Crafts Mission.  As a result, it continues to offer a blend of simplicity and beauty that thrives in popularity. Check out our Shipshewana Amish furniture store to view a wide variety of Mission furnishings. 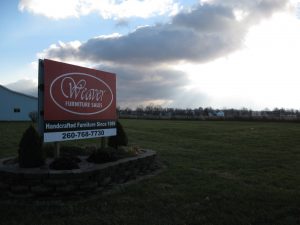 We enjoyed seeing Weaver Furniture Sales and meeting all of you nice people. We have told many people since then how nice a facility you have and what superb quality your furniture is.

My table arrived and I love it! Thanks for all of your help!

The cabinet arrived this morning and it is just beautiful! WHAT QUALITY!!!!

After Thanksgiving Sale
Scroll to Top