Comments Off on Queen Anne: Giving Your Home a Royal Touch

What’s the best way to feel like British royalty in your home? Having a spot of afternoon tea (with ‘biscuits,’ of course) might help. So would playing polo on your lawn. But here’s a better way: Furnish your home with Queen Anne furniture from Weaver Furniture Sales. It’s all about Queen Anne: Giving Your Home a Royal Touch.

Queen Anne: Popular on Both Sides of the Pond

Queen Anne furniture developed in England in the late 17th Century during the reign of Queen Anne. However, the furniture style did not become popular until much later. And at that time, it was dubbed ‘Queen Anne.’ 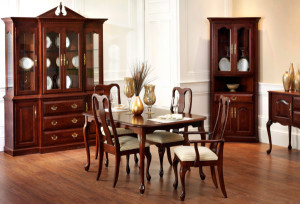 Featuring the iconic Queen Anne elements, the Queen Anne Dining Room Set promises to give your home a royal touch.

Queen Anne furniture’s rise in popularity paralleled that of the increase in social gatherings in the home in jolly ‘ol England. (That’s code for tea time and similar events.) So it’s not surprising that Queen Ann chairs are so comfortable. This explains features like the shoulder-hugging winged back and the cushioned seat. Plus the spine-hugging curvature in the back of the chair. In fact, some furniture experts claim that Queen Anne is the first chair ergonomically-built with spine support.

Several other features give the Queen Anne its distinctive look. These characteristics include the wood fashioned in C-scroll, S-scroll, and S-curves. Restrained ornamentation, usually shell-shaped, is another big feature. But if Queen Anne furniture has a trademark feature, it’s the cabriole leg. This shape is distinguished by a convex shape at the top and a concave shape at the bottom. Plus an ornate foot.

Ready to give your home a royal, Queen Anne touch? The Queen Anne Dining Room Set from Weaver Furniture Sales may be the best place to start. Other Queen Anne pieces from Weavers include vanities and dressers. Also secretary desks and jewelry armoires.

Why choose Queen Anne furniture from Weaver? Because the best cabinetmakers in the Midwest – Amish men – skillfully handcraft each piece. Also, the Amish artisans use quality regional hardwoods like oak, maple, cherry, and hickory. So, with proper care, the furniture you buy should last for generations to come.